Laughing in the King’s Face, Part II: Lenny Bruce and the New Guard of Comedy

Still wearing that suit and tie, but now, it’s not fitting as well as before.

The origins of the change in comedy from pure entertainment to an intellectual and political art form is difficult to pinpoint. As mentioned in a  previous blog post, the role of the jester, and, older still, the Trickster archetype, has been a part of human history and mythology since we first began to write stories. In the context of comedy and the 20th century, it was men like Mort Sahl and Woody Allen who first took stand-up comedy and made it into an exploration of personal experiences, rather than dim one-liners. But they were still strictly entertainers, who tread lightly around the subjects of power and politics. 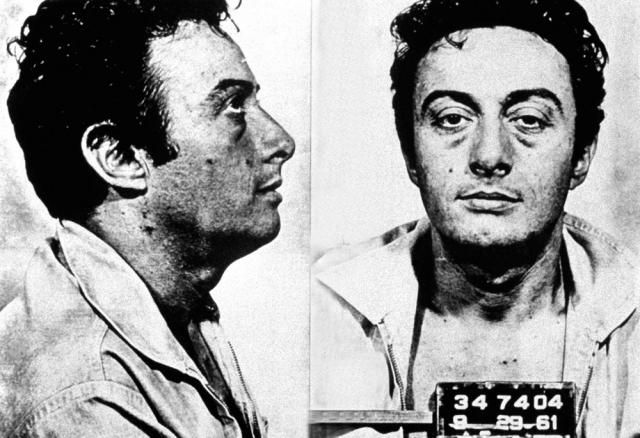 I introduce Mr. Bruce with the caveat that History has a habit of forgetting names. I am sure there were many other comedians who contributed to the big shift, many of whom will never be known, who were so controversial and hated by the establishment that they will never be remembered.

Lenny Bruce was many things. A New Yorker, a Jew, a World War II Veteran and dischargee, a failure, a triumph, a social critic, a language enthusiast, and a man with a firm belief in what was right and what was wrong.

From the very beginning, he had trouble with authority figures. In 1945, Bruce did a drag performance for his fellow Navymen (not seamen) which greatly disturbed his superiors. When they confronted him, Bruce asserted that he was suffering from “homosexual urges.” He was dishonorably discharged, a decree that Bruce challenged, and got changed to just plain old “discharge under honorable conditions.”

As a comedian, Bruce started out like many others: poor, living in New York City, and saying funny things to entertain nightclub audiences. Set against the backdrop of the Civil Rights movement and Red Dread, Bruce began to stand out as a self-described “oral jazzman.” He riffed on issues that were troubling him: race, religion, morality, discrimination, patriotism, abortion, drugs, etc. All divisive issues for the time, which, as evidence of how slow progress marches, are still hot button issues today.

Take the bit posted above, in which Bruce mockingly uses racist terms in order to illustrate both the ignorance of racism and the natural emptiness of the words themselves. He compares racist slander to a politician using the words “I swear to tell the whole truth and nothing but the truth, so help me God” to illustrate that repeating words makes them meaningless. For a while, the ruling class, and their mouth pieces in the media, decried Bruce as an obscene man, and compared him to a freak show, a one-time fad that would come and go.

He had a long list of legal troubles, which came to a head in 1961, when he was arrested for obscenity – in San Francisco, of all places. Though he was acquitted, the law began to monitor his appearances. This is how powerful they thought he was, how provocative. They liked the clever and silly wordplay of Milton Berle and his ilk, but here was a man who was speaking truth, and they knew they had to keep him quiet.

In April of 64, Bruce was arrested, and sentenced to four months in a workhouse. He was able to walk free on bail, but it wasn’t until the 2000s that Bruce was officially pardoned by New York City – decades after Bruce’s death.

Bruce’s attacks on societal rules, self-imposed limitations, government, the anti-communist and obscenity movement, condemned him to a life of living on the fringe. He introduced the full potential of comedy, and influenced the generations to come.

FUN FACT: Bruce’s wife was a stripper, and he worked as hard as he could to keep her out of the humiliating and exploitative business of adult entertainment. At times, he engaged in scams to collect money for her, posing as a priest named Brother Mathias to collect money. He was arrested for soliciting donations for a leper colony in Guiana.

Richard Pryor moved to New York City when the Civil Rights Movement was reaching a fever pitch. This was the year that began with the March on Washington, where Martin Luther King JR gave his famous speech at the foot of the Lincoln Memorial, and ended with John F. Kennedy dead in Texas.

Pryor started safe, like Bill Cosby. He played to white audiences, many of whom were not interested in what a black man had to say. It was not until ’67 – a year before the Civil Rights movement “ended” that Pryor started getting regular television appearances. It was also in 1967 in which Pryor had an epiphany, which changed the course of his career. He walked out on a sold-out show in Las Vegas, realizing that he was, in effect, a performer in a modern-day minstrel show. He resolved to change his comedy, and in doing so, a legend was born.

Pryor dove into the counter culture of the 60s and 70s, where he was accepted with open arms. He confronted audiences with bitterness and sardonic humor, tackling the subjects of race relations, sex, African American image and culture, and the the exposure of the ugly roots of American history. A second revelation happened upon visiting Africa in 1978; when he returned, he vowed never to use the N-word again, for reasons illustrated in the above clip.

Pryor broke into television and film, writing for Sanford & Son and co-writing Blazing Saddles with Mel Brooks. His appearance at the Academy Awards made the five-second delay in live television airing a standard practice, due to his usage of profanity.

Pryor paved the way for black comedians to talk about painful subjects, and inspired comics of all races to air out their dirty laundry on stage.

George Carlin is one of the most prolific comedians of all time. Fourteen HBO specials, countless television appearances, books, and essays. But like Bruce, Carlin began as a shill yuk-yuk style comedian, and like Pryor, it took an epiphany for him to make his move from clown to provocateur.

Carlin was a man in a monkey suit making funny faces and voices up until the 70s, when he became infatuated with the counter-culture in America, and realized he was speaking to the wrong group of people. Eleven years after Lenny Bruce was arrested for obscenity, so was George Carlin. A decade and a year, and still, speaking was a criminal offense!

Because of George Carlin, the FCC became more stringent, enforcing draconian laws restricting freedom of speech. But Carlin did not relent. He now sported a hippie beard, hippie hair, and comfortable clothing. With every passing year, Carlin became more in the line of Samuel Clemens, an essayist with jokes. The Reagan era sparked a new anger in Carlin, and an abandonment of hope. He became a “working rage-aholic,” viciously attacking the institutions of religion, government, and consumerism.

Women comedians first came to prominence in the fifties. Phyllis Diller is largely considered to be the Mother of Comedians, followed by Joan Rivers and Lucille Ball. Their acts consisted of witty one-liners, meditations on being a woman in a male dominated world, self-deprecation, beauty and celebrity. Diller was mentored by Bob Hope, but soon branched off and became a formidable comedic mind, as well as an advocate for plastic surgery.

But, as with many progressive topics, America is slow on the uptake. Only recently did the Female Comedian revolution begin in earnest, 60 years after Phyllis Diller first stepped onto the stage and proved that a woman could be as funny, or funnier, than a male comic.

Tina Fey became the first female head writer for SNL in 1999, and soon after created the wildly popular television series, 30 Rock, which was praised for its rapid-fire timing, outrageous characters, and quotable lines. Amy Pohler, a fellow alumni of Second City, created, writes for, and stars in another extremely popular show, “Parks and Rec.” Lisa Lampenelli exploded onto the comedy scene as one of the first female insult comedians. Roseanne Barr, Ellen DeGeneres, Margret Cho, and Jane Garofalo led the vanguard against the discrimination of women. Sarah Silverman proved that a woman could be just as provocative as any male comedian with her brand of vulgar one liners and insightful commentary.

And, most recently, Tig Notaro made headlines with her brutally honest improvised thirty-minute set, blurring the lines between comedy and tragedy.

Women comedians have made it clear: Comedy is everyone’s playground. You just have to be funny.

Comedy at the Edge by Richard Zoglin

Stand-up Comedy in Theory, or, Abjection in America by John Limon

Lenny Bruce: The Comedian as a Social Critic and Secular Moralist by Frank Kovsky

Seven Dirty Words: The Life and Crimes of George Carlin by James Sullivan

I Ain’t Dead Yet Documentary Film about Richard Pryor