When the power went out last night at the Superbowl in New Orleans, the twitterati went to work lighting the feed with witty one-liners about Beyoncé’s larger than life power surge.

Beyonce dominated the Super Bowl half-time with a fierce performance. Queen B was so electric, she may have even knocked out power to the Super Dome. –Annie Colbert, Mashable

Collectively, we embue celebrities with the status of superhero(ine)s. That even twitter witticisms align Beyoncé with an ability to short-out stadium amperage through sheer force of her performance, belies the level of power (metaphoric and otherwise) we accord pop stars. But what of the massive wealth amassed by these icons, and their role as multi-platinum level consumers (including electricity use to illuminate a halftime show, and the millions of flatscreens to view it)? Clearly unsustainable on the human and global scale. How do celebrities become superhero(ine)s for social causes? And is the nature of celebrityhood, in an era of superstorms and an super-sized global issues undergoing a transformation for social good?

“We Are the 99%,” the rallying cry of the Occupy Movement, has produced an echo effect across social media and mainstream media that proved influential in the 2012 Elections, where the “The 1%” remained an effective rubric for corporate malfeasance and greed, continuing on beyond the often lifespan of a sound bite or meme. The buzz narrative driven by cell phone photography and video clips took the spin-doctors of mainstream media and the GOP advertising campaigns by surprise. Through this movement, which debuted on September 17, 2011 a week after the ten-year anniversary of the 9/11 tragedy, a collective spotlight fell on the 1%–an oligarchy of corporate CEOs, bankers and media magnates–to become the anti-celebrity villains of the hour.

What of the elite celebrities from TV-movieland and Hollywood, whose tabloid click-throughs on the margins of “real news” helped forge the new media empires of Ariana Huffington and the old media kingdoms of Rupert Murdoch and Roger Ailes? What is it about Beyonce and Jay-Z, Brangelina, Prince William and Kate Middleton’s wedding and Reality TV’s non-stars made famous that entices our attention and helps build celebrity brands? And how do celebrities use their power for social good? 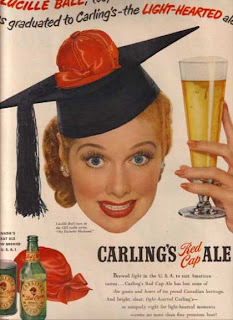 Lucille Ball in Carling’s Ale ad, 1951
Since the advent of advertising, celebrities have tapped their good looks and stature to promote products (see Lucille Ball’s beer ad from the early 1950s, above).
What happens when celebrities transcend their glitzy me-worlds of elitist consumption and bad girl/bad boy drug scandals scripted for the paparazzi to tap the influential power of stardom to promote change? The trend in cause celebrityhood has experienced an uptick over the past ten years, with fame luminaries increasingly using their status and name recognition to tackle global warming, world hunger, AIDs, malaria, human trafficking, and fracking. Viral media campaigns like It Gets Better.org continue to influence the discourse around LGBT rights through the YouTube posting involvement of a broad spectrum of personalities in fashion, sports, entertainment and politics, from Tim Gunn to Hillary Clinton.

Mark Ruffalo stepped into the environmental movement recently, along with Yoko Ono, Sean Lennon and Susan Sarandon, with a vehement call to end the highly polluting practice of fracking, amplifying the message of Josh Fox, producer of the Academy Award nominated “Gasland”

Trailer
Through the evolution of online networks like YouTube, Facebook and Twitter, the pathway into celebrityhood has shifted as well. Outside the purview of manufactured Reality TV, celebrities, including Justin Bieber, Rebecca Black and Susan Boyle have crossed over into mainstream notareity, building their own audiences through viral YouTube clips and social media. But social media’s shareware fluency has given rise to a new generation of cause-based everyday hero celebrities  as well, sometimes through tragic circumstances.

Malala Yousafzai , shot on a bus by the Taliban in her native Pakistan for her blog advocacy for global girls’ education, has, post-recovery, become a voice for gender equity and a role model of bravery, dedicating her life to the cause of educational rights. See the New York Times blog for more information about Malala’s fund for girls’ education administered through Vital Voices Global Partnership, and for more details on her story.

This year, teenage girls joined forces at Spark Summit to challenge the uses of PhotoShop at fashion magazines. Their Change.org petition led to an agreement from Seventeen Magazine to curtail this rampant practice which impacts on the identities of real girls and women. (See the interview with Spark Summit partner, Julia Bluhm, “Don’t Photoshop My Story!”) The efforts of a group of teenage girls has inspired others to take their fluency in social media to help change corporate fashion.

What happens when the message itself becomes the influencer, transcending a human face or icon to collectivize  movements of change? The ingenuity of the #OccupyWallStreet movement, which has crowdsourced its leaderless message of change via social networks to shape the political discourse now underway in the United States. In this case, the #Occupy meme itself becomes the celebrity, an idea whose DNA is so resilient and multivalent, it has the ability to transcend geographies.

What are your thoughts on these facets of celebrityhood evolutions and social change?